🔊 Aissatou, a young voice for Africa

How one girl in Africa finds strength to stand up for her friends.

Speaking out against child marriage

HELLO and welcome to WoW!, the positive podcast, showing kids that there’s a lot more to world news than bad news.

I’m Alastair. And today, I’m going to be talking with Clarisse about going to school.

Do you remember school!? I know many of you are hard at work at home. But because of corona virus you haven’t been to school for weeks. You’re missing your friends and getting outdoors and all that. Let’s hope you’ll be back to normal soon.

In the meantime, you can find plenty of great ideas on the WoW! News website – wow-news.eu – and of course keep tuning in to our positive podcasts. Share them with a friend! Cheer them up by letting them know about Wow-news.eu. Wow news.

A – Hello Clarisse! How are you doing?

C – I’m fine thanks, Alastair. Every week is a little bit the same, no? I’m sort of getting used to staying at home. But also getting a little bored of not going out.

A – I can imagine Clarisse. And I think for millions of people around the world who would normally be in school, it’s very strange indeed.

C – And you said we’re going to talk about school today?

A – Yes, Clarisse. Of course we like to keep people up with the news. And at WoW! we’ve had some really good news stories over the past few weeks – not just about people cooperating to fight corona virus but also about clever new solutions for pollution and climate change and looking after nature. That’s all at wow-news.eu!

But we’ve also been using this time of being at home and things are a bit quiet on the news front to think about some big issues – including school and why it matters.

C – Ah, you mean we’ve talked about people who can’t go to school normally? Like Malala?

A – Exactly. It’s easy for most people to take it for granted that we go to school. And of course we all know that sometimes we’d rather not go. But when we have to stay away for weeks and weeks – even though we’re still trying to study – it’s a good time to think about what it’s like for people who can’t go to school. A couple of weeks ago we introduced our listeners to Malala. She was in Pakistan when a bunch of bullies took over her part of the country and told girls they couldn’t go to school…

A – Exactly. Malala said No! She was only 10 but she kept going to school. And she spoke up for herself and all the other girls. And she made the bullies look pretty stupid. Well, today we’ve got another story of a girl who speaks out about school.

C – OK, so she has the same problem as Malala?

A – Well, not quite, Clarisse. We want to introduce people to Aissatou. You can hear from her directly over at wow-news.eu . Aissatou, who lives in the country of Guinea in West Africa, spoke to our friend Virginie and you can watch the video on our site.

C – Great. And so what is the problem for Aissatou about school?

A – Well, Aissatou is another young girl – she’s still only 13 (check) – and she’s standing up for her friends who have to get married before they leave school.

C – Married? Isn’t she too young to get married?

A – Well, yes, Aissatou is too young to get married. So are most of her friends. In Guinea, where she lives, the law says you should normally be at least 18 before you get married. But in the past, girls have got married a lot younger and lots of people in Guinea think that’s still normal. So lots of parents still push their daughters into getting married before they’re 18 – more than half the girls in Guinea are 17 or less when they marry, and often they’re only 14 or 15.

C – Gosh. That is really young. Does that happen in a lot of countries?

A – Sadly yes it does happen. Our friend Virginie, who interviewed Aissatou for WoW! this week, put it like this. Can you shut your eyes and count to 7?

A – There you go. In those 7 seconds a girl who was younger than 15 got married, somewhere in the world. At least that’s true on average. The United Nations, the organization for governments, reckons that a million girls a month get married. And of course a lot of them don’t really get a choice. It’s their parents who push them – even though there are laws and international rules that say they can’t do that.

C – Hm. And what does that mean for school?

A – That’s a good question, Clarisse. There are lots of reasons why it’s not good for children and especially girls to get married so young. It can be very bad for their health, especially if they have a baby. But it also often means that they have to start working in the house, cooking and cleaning and so on. Aissatou talks about her friend who got married and really wanted to stay on at school. But then she was having a baby and she found she just didn’t have the time to go to school.

C – So what is Aissatou doing about it?

A – Well, like Malala, Aissatou is speaking up. When her friend had a baby and had to stop school, Aissatou found there was a club for girls in Guinea who wanted things to change. She joined up and she’s now president – great job title, eh? – of the club’s group against child marriage. I think it’s really important for everyone to realise that children have rights and need to be listened to. And Aissatou and Malala are really good examples of people who just try calmly to persuade people.

C – And is she having success by speaking up?

A – Aissatou and her friends are getting attention. Politicians speak to them. Aissatou took part in a film last year that showed children around the world who are making a difference and changing things for the better. When she’s not in class herself, she goes round talking at other schools or she goes round the local market with a loudspeaker to tell grown-ups why they should let girls finish school.

A – It is pretty brave. I’m not sure I would do it. And sometimes if Aissatou and her friends here about a girl having to get married, they go and get the police to come and stop the wedding. That’s really dramatic stuff, as you can imagine!

C – And how does Aissatou try to persuade people to let girls go to school?

A – First, of course, she says it’s their right to choose to go to school. It’s fun for them and it gives them more choices when they grow up. They might, say, want to get a job instead of staying at home. They might not. But if they do later want to get a job and they haven’t finished school, then that’s difficult for them. But it’s not just about what each girl might want for herself. Lots of expert research has found that if women have their first baby when they’re older, then their children and their whole family will be healthier and will probably find life a bit easier. Remember, it’s mainly in very poor countries where girls are under the most pressure from their parents to get married very young. These are countries where people don’t always have enough to eat. So these decisions about school and work are massively important.

C – So you’re saying that if girls stay at school, then it’s better for lots of people, not just for the girls?

A – Exactly. Lots of experts say that in fact one of the single best things that the leaders of any poor country can to to help make their people richer is to help girls stay at school and get a good education and put off having babies till they’re a bit older. Now that doesn’t mean that they need to be like the richest countries, where people often don’t become mums and dads until they’re really quite old. But at least waiting until girls have graduated from high school is a really good thing to do.

C – And what about Aissatou? What does she want to do?

A – Well, Aissatou says she wants to be an international journalist. She certainly shows a lot of promise because she listens to people really well and she explains what’s going on well too.

C – And that’s what you spent a long time doing, right Alastair?

A – Yes, I guess I should know! I spent many years as a journalist around the world. And I think Aissatou will do really well!

C – Great. I’m going to go over to the website and listen to her in her interview with WoW.

A – Good idea, Clarisse. You’ll find it on our site at wow-news.eu! Happy listening!

And that’s it for now from me too. I let you all get back to what you were doing.

Are you studying at home? Do you have any good tips to share? Do let us know. You’ll find our contact details at wow-news.eu .

My tip for getting things done is to give myself little bursts of concentrated time and then let myself do something else. One way to do it is to work for 20 minutes and then take 10 minutes to walk around or read something fun. It works for me anyway.

Before I go, we’d love you to tell us how you feel when you hear about Aissatou. I’m sure she’d be delighted to hear from you or your school too. So do get in touch with us and we’ll pass it on to her.

If you’ve enjoyed listening, do tell your friends about us, the positive podcast from WoW! News. Clarisse and I will be back next week. Until then, stay home, stay safe and keep … positive! 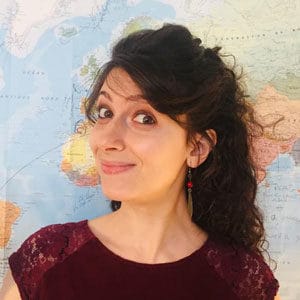